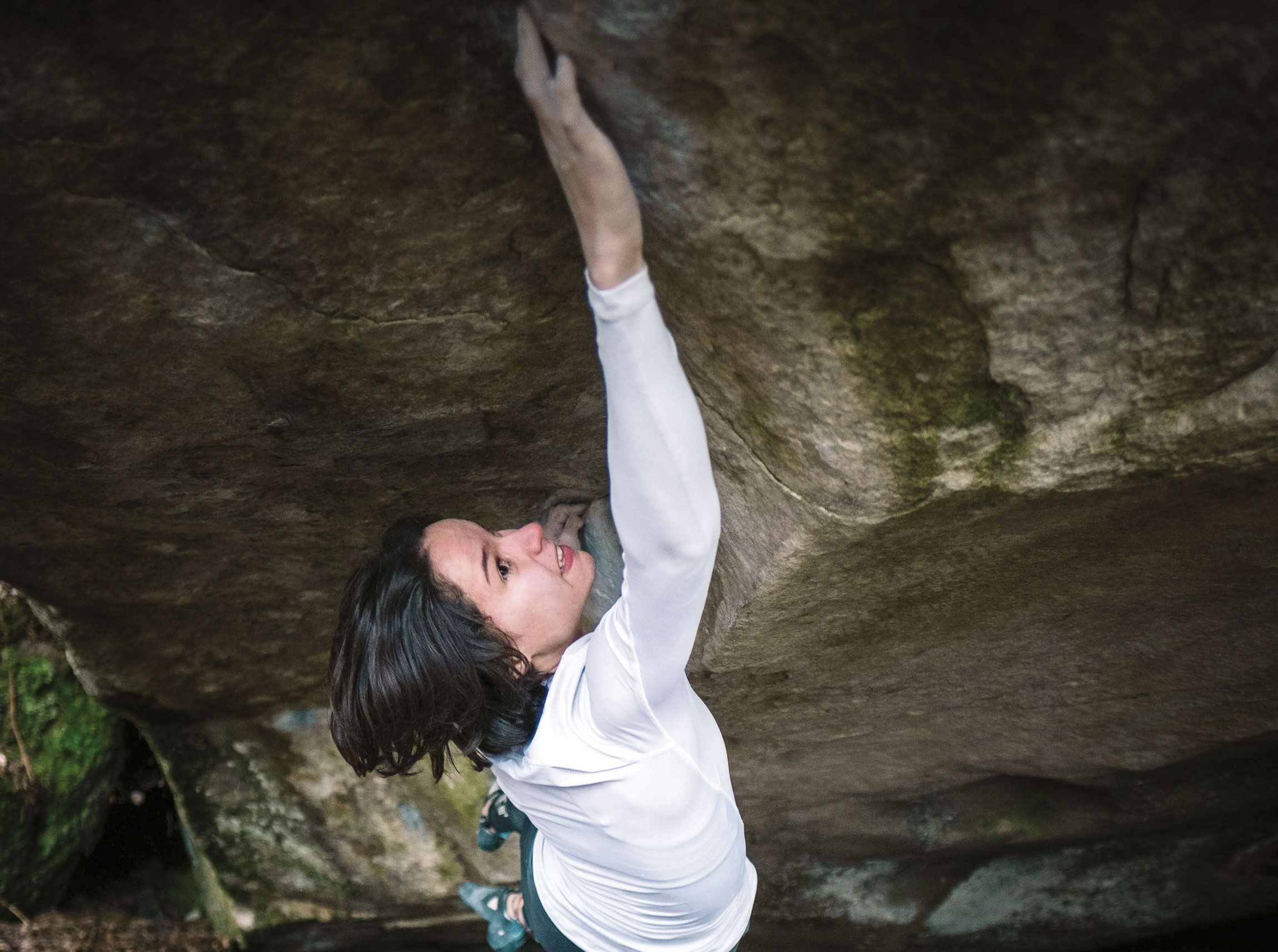 She’s just 17, but she’s already a big name in the world of bouldering and climbing. She dreams of the Olympics, but for the moment she is “satisfied” with scoring great results in the World Cup.

There are those who take a lifetime to solve an 8b+ boulder problem and those who succeed at 12 years old. Oriane Bertone is definitely part of this second category, and we are talking about the record-breaking feat on Golden Shadow, in Rocklands, South Africa, in 2018.

But there’s more: in January, when she was just 16 years old (she is born in 2005), she solved Karma (8a+), one of the most legendary boulder problems in the world located in Fontainebleau, which in 1995 gave to Swiss athlete Fred Nicole fame and applause. For Oriane, being the youngest climber to complete an 8b+ did not seem enough and, in 2019, she won the junior climbing and bouldering world title and, since last year, she has entered the senior category where she has already made things clear: in the World Cup circuit she has already taken home a silver medal, in Meringen. Since 2022 she has also joined the Black Diamond team as an athlete: let’s say that in the world of climbing she is getting to the top.

We have a meeting on Zoom but there’s a hell of a noise, I tell her I can’t hear very well and she apologizes, but she is in the gym and that is the quietest corner. On the other hand, she usually starts training at 8 in the morning and goes on until she resists, “until I forget what time it is.” As I am writing, Oriane is aiming for the French championship within a week and then clearly the World Cup season. She aims to make it to the final in at least a couple of the most important circuits, World Championship is a term that she repeats often, like a mantra. But the goal that paws under the skin are the five circles, even if the girl is extremely lucid and focused, despite her young age: “I would definitely love to be part of the team that will represent France at the next Olympics, Paris 2024, that will be played at home, for us, but I do not think I have reached the necessary level yet. Surely my mind goes there and I’m training for it, but I’m not sure if I can make it.” From the Mac screen I can’t understand how modesty and how much superstition there is, but judging by what she has already been able to achieve I really think she will make it.

You can boast a veteran climbing resume, but you’re only 16 years old. When did you start climbing?
When I was little my sister used to take dance lessons and my brother and I accompanied her and we had to wait for her training to finish, which that was ok because, in the gym where she practiced, there was also a climbing wall. That’s where I first tried climbing. We looked forward to the next time to try new routes and combinations, we liked to test ourselves with always different holds.

Your brother is also a professional climber, is there any rivalry between the two of you?
Max is a little younger than me, he is 14 years old: he is also an international climber and, if I have to tell the whole truth, yes, there is some kind of rivalry between us. As in a normal relationship between brother and sister I think, but with a little more competition. But I think that’s good because this is precisely one of the reasons why I progressed so quickly in climbing. My constant desire to beat him, as opposed to his constant desire to beat me, made me become stronger quickly.

Do you think that this natural inclination you have, this instinct for climbing, is a kind of gift?
I never really wondered, because I never thought of my way of climbing as a gift, but rather as the natural evolution of a lot of training. I never thought about it too much because it just happened. Also because when I was younger, on Reunion Island (which is part of the French overseas territories: administratively it is France, geographically it is an island in the middle of the Indian Ocean, facing Madagascar), I used to climb mostly outside, where it often happened to face some pretty tough boulders and this made me progress at the same time also in indoor climbing. I think it was at that time that I started seeing this sport as a constant in my life, but the fact of recognizing it as a career is a recent thing in reality, because it is an inevitable question in every interview. I think that every climber who gets to compete in the World Cup has an innate component within and a strength that others do not have, but what I always tell myself is that what I have now is the result of my training, which is always been massive.

What did you think when you closed your first 8b+?
I’m not sure, I was really very young: I had already solved some tough problems and I tested myself with those too. It was only after that I realized it had actually been a really good test. I was very happy, but like every time I managed a rather hard boulder problem. It wasn’t that special after all, or rather, it was because it took me a lot of time to finish it, probably it’s the one in which it took the longest time ever, but I didn’t think it was special for its degree of difficulty, as much as for the kind of climbing itself.

How is your approach to the senior category going?
It was truly a crazy time: I would never have believed I could achieve such high results in the first year. I still remember that before the first competition I didn’t think I could do it, and then it just happened. Many people then began to tell me that I have already reached a lot of milestones and that therefore I have to take everything that comes now in a relaxed way: I followed this advice and I made it to the final. I think this has been the best year of my life so far.

Do you ever feel the pressure of being identified as an enfant prodige of climbing?
When I started climbing seriously I realized that the people who counted on me were starting to grow and that I had to constantly prove that I was the strongest, a unique talent. So let’s say that I felt the pressure strong enough right now, but I learned how to protect myself by reminding myself that I do what I do not for other people, but for me and because I like it.

You can buy The Pill Outdoor Journal 52 here